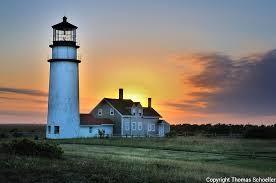 When you think of the Cape, what comes to mind? Perhaps its the miles of unspoilt beaches along the National Seashore to explore, or our world famous Wellfleet oysters, a homemade bowl of creamy clam chowder or fresh lobster?

The Cape’s history is full of sailors stories, numerous shipwrecks and heroic rescues, so for many there is a romantic image of our lighthouses. With 14 lighthouses on the Cape, we always suggest that our guests visit some and just imagine if the lighthouses could talk, the stories they could tell. And as we move into the Fall, what better time to visit, here are six of our local favorites. 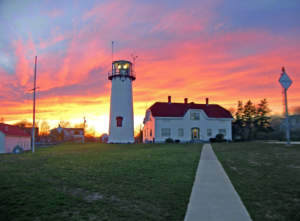 Just a short 20 minute ride from the Inn, the drive includes a glorious run through Pleasant Bay. Just before reaching the Lighthouse stop off at the Chatham Fish Pier and watch the trawlers offload their catch.

The recent Disney movie, ” The Finest Hour“, tells the story of a herioc rescue from the Coast Gaurd Station in the fifties, after a tanker had run aground during a ferocious storm off the Cape. 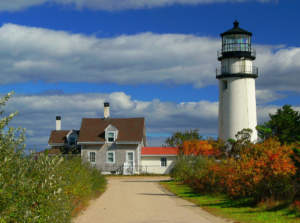 None other than President George Washington signed the bill on May 17, 1796, approving $8,000 for the construction of Cape Cod’s first lighthouse, Highland Light. Only the seventh to be constructed by the U.S. Government, it was situated on ten acres on the Highlands of North Truro and was usually the first light seen when approaching the entrance of Massachusetts Bay from Europe. Although Highland Lighthouse is officially known as Cape Cod Lighthouse, it remains “Highland” to locals. 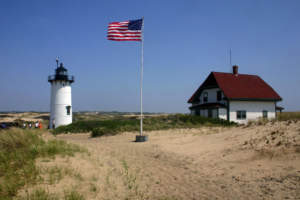 By 1876, the old stone “tower” needed rebuilding, and was replaced by a 45-foot cast-iron lighthouse, lined with brick. The Fresnel lens was also installed. Today, the Race Point LightHouse optic is still an active aid to navigation, maintained by the Coast Guard. 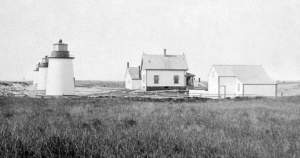 An 1836 petition by Eastham residents concerned about loved ones at sea caused the Boston Marine Society to recommend to the United States Congress the construction of the Nauset Lights. Congress granted $10,000, and the contract was awarded to Winslow Lewis, the lowest bidder at $6549.

Three 15-foot high masonry towers were built. The lights soon gained the nickname “The Three Sisters” because from sea they looked like women in white dresses with black hats. 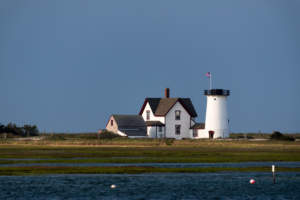 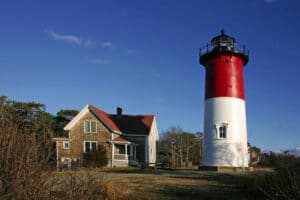 Nauset Lighthouse, which is listed on the National Register of Historic Places, is made of cast iron with a brick lining and stands 48 feet high. Coastal erosion meant that by 1996 it was dangerously close to the edge of the cliff. Less than 35 feet remained in November 1996 when Nauset Lighthouse was moved in one piece approximately 300 feet to a new site across the road. 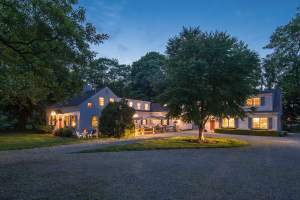 The Parsonage Inn is just minutes from both the ocean and bayside beaches. The Inn is opposite one of the best Farm shops on the Cape, close to gorgeous local gift shops, restaurants and the highly rated Sundae School ice cream . Each of our rooms are individually appointed and we offer a delicious organic breakfast each morning.

Reserve your room today, we look forward to welcoming you to Orleans Cape Cod soon.

Posted in: The Parsonage Inn News

One thought on “Cape Cod Lighthouses”